The start of Vanguard’s second season introduces a new team Daybreak and its leader Mirei Minae. The blind lady that leads with her cheerfulness is also Danji’s younger sister. Her fight in Episode 17 shows despite everything, she has the hidden strength and calmness of a Shrine Maiden, fitting considering her avatar.

This deck’s main mechanic is the Normal Order-Arms. These cards are considered as normal orders and will be Armed to the left or right of the Specific Vanguard at the Vanguard Circle. As they are still considered as normal orders, they can only be played Once per turn and stay equipped on the Vanguard Circle until another specific Deity Arms is equipped over it. 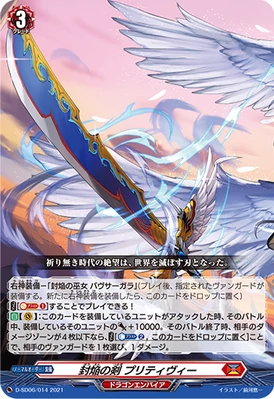 Sealed Blaze Sword, Prithivih is the Right Deity Arms. By paying Soul blast 1 to equip this, the armed Vanguard will get +10k power when attacking with this equipped. This Arms’s main power is that, after the battle, by paying Counterblast 2 and placing it in the drop, it can deal 1 damage to the Opponent Vanguard if the Opponent has 4 or less damage. Being able to deal 1 Damage is really important as it covers a lot of thresholds. The simple 3 to 4 damage, which pushes pressure on the opponent and the much coveted 4 to 5 damage, making your opponent have to guard the remaining attacks in the turn. This helps accelerate its winning gameplan by rushing and pushing damage through to the opponent. 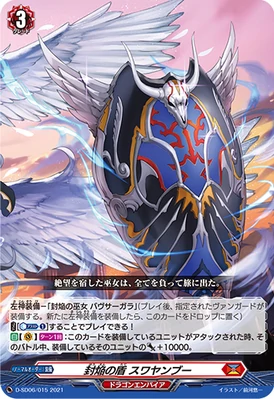 Sealed Blaze Shield, Swayanbuh is the Left Deity Arms. Its skill is defensive, but a non conditional 1/Turn +10k power to your Vanguard when attacked is worth 10k Shield, which is worth 2 grade 1/2 cards in shield value. It is simple and will save the hand size in a long game. 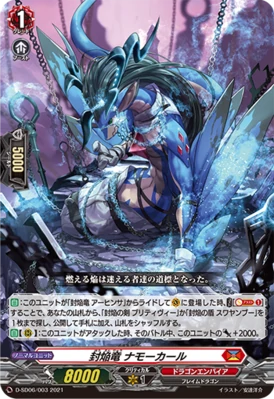 Starting with Sealed Blaze Dragon, Namorkahr. Its skill allows you to choose specifically Sealed Blaze Sword, Prithivih or Sealed Blaze Shield, Swayanbuh from your deck and add it to hand when riding upon Sealed Blaze Dragon, Arhinsa. This is already a net +1 to hand, also allowing you to choose which weapon you want immediately. Its second skill is similar to that of Blaze Maiden, Rino, which allows it to be a 10k attacker. Relevant due to Bavsargra calling this card back and likely to be an attacker.
A first in D-Standard, it forces a specific starter required for its skill. It should not matter for the rest of the format, considering that Bushiroad have been sticking to the same Grade 0 Starters for the main 6 nations as of this article. 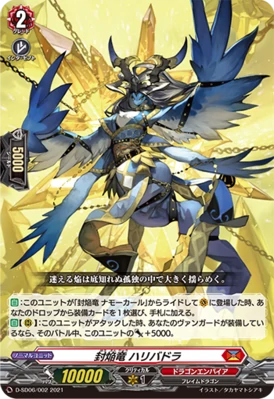 Next up is Sealed Blaze Dragon, Halibadra. Its skill allows you to add any Arms card from the drop zone and add it to hand. This means that the Arms can be used as a discard fodder and added back to hand immediately when riding up. Its second skill gives itself +5k power if the Vanguard is armed, making it a decent attacker. This card is likely to not make it in the main deck in the long run, and will be just for this current iteration of the deck. 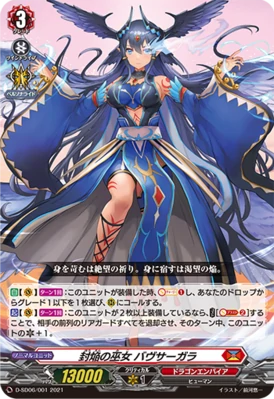 And now the main Vanguard, Sealed Blaze Maiden, Bavsargra.
When Equipping Arms, you can Soul Charge 1 and call any Grade 1 or less units from the drop zone. Some notable things this skill can do: It can call Burning Flail Dragon to Soul Charge even more if required; Calling out Namorkahr after Soul Blasting it for cost to be an attacker or booster. In fact, this skill only improves as long as more Grade 1 units are printed for Dragon Empire. Any Grade 1s from past or present will be considered for use in this deck due to this.

The main star of this deck is her second skill. With 2 or more Armed cards, you can Soul Blast 2 to retire your Opponent’s front row rearguards and get +1 Critical to itself. This combined with the Sealed Blaze Sword, Prithivih will always threaten the opponent for the game.

For this deck, sticking to its main Ride Line is important for its game plan and currently unlikely to utilize the other ride decks in Dragon Empire.

As 3 cards are printed with the Trial Decks and 1 of them is a Grade 2 10k Vanila, there is only 2 cards printed that support this ride line so far. 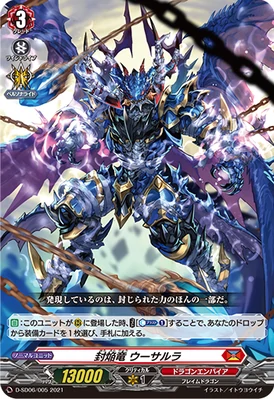 This dragon can pick any Arms card in the drop zone and add it to hand for Counterblast 1. It is most relevant to pick up the Sealed Blaze Sword, Prithivih, as the deck need a way to get back Prithvih after using its skill. 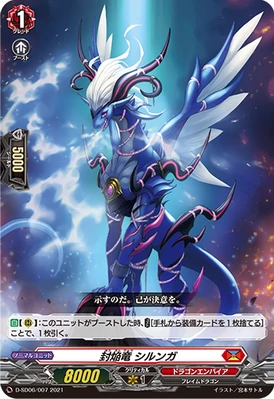 A simple discard 1 Arms to draw 1. Useful to cycle extra Sealed Blaze Shield, Swayanbuh for a better card. As you could need multiple Sealed Blaze Sword, Prithvih to finish the game, discarding it may not be a good idea until the next set of Arms is printed.

As this is just a Trial Deck with its main Support upcoming in D Booster Set 4: Awakening of Chakrabarthi, these decklists are currently what players in Japan have been using to some success in their local shop tournaments.

This deck is using the strong generic package that Dragon Empire has to offer. Stealth Dragon, Tensha Stead is a great way to attempt searching for the Persona Ride copy, as it helps the deck push with the Persona Ride power. Explosive Artillery Dragon, Brachioforce is a strong rearguard that can apply an on hit pressure to draw 1 and retire 1 opponent rearguard if it hits. Stealth Dragon, Fushimachi Madoka is a 10k attacker/booster and also a strong 10k or 15k shield according to your opponent’s drop zone. It helps you to survive till Bavsargra grinds out the game. Swayanbuh is a 1 off copy and the main target to be searched by Namorkahr as you would want to Arm it first

This is a more unique take of the deck, playing Trickstar and Varina Arcs to cycle through the deck. Trickstar can be called from the drop zone by Bavsargra. The 50th card Varina Exspecta can help be a threatening Rearguard overdressing on Varina Arcs. Stealth Dragon, Togachirashi can be used to help provide more soul in cases where you do not draw the Persona Ride. Dragritter, Shihab can fulfil the same role here as a more budget option. Swayanbuh is a 1 off copy and the main target to be searched by Namorkahr as you would want to Arm it first

This article is just a simple introduction to the 6th Start deck which introduces the 16th main boss in Overdress. It is a small view on how the deck is performing currently and any small things to look out for going into the Set 4. Its future can only get better as it is already performing decently with only its Start Deck.